The Gagne & Son story begins in 1945, in a two-car garage on a quiet street by the river in Augusta. There, father and son team Alfred and Pete Gagne produced their first 8” concrete block. It would be the first of many, and it would lay the foundation for a Maine-based family business built on quality, integrity, and hard work.

As demand for their product grew, Gagne & Son expanded and modernized their capabilities to meet the needs of the market. While keeping a critical eye on the highest-quality standards they were known for, they acquired new equipment, broadened their product offerings, and increased production. Gagne & Son now operates a 35,000 square-foot manufacturing plant, three warehouses, a quarry in Belgrade, and eight showrooms across the state, from Kittery to Holden.

Building for the Future

Modest beginnings set the groundwork for Gagne & Son to grow into a market leader, a trusted partner, and an integral resource in Maine’s commercial building and home improvement industries. With their commitment to providing only the best sustainable, locally sourced materials and unrivaled customer service, Gagne & Son will continue to pave new paths in stone masonry manufacturing for years to come.

Alfred Gagne and his son, Albert ‘Pete’ Gagne, started the business in a two-car garage next to the family home on Washington Street in Augusta.

The manufacturing plant is moved to Belgrade.

Albert ‘Pete’ Gagne and Joyce have their first child, Linda. The company has 8 employees

Production increases to 4,000 blocks per day.

Pete Gagne purchases two apartment buildings in Augusta, tears them down and builds a 30-unit complex with concrete block.

Production increases to 6,000 block per day. Linda Gagne starts working for her father after school.

The company opens a hardware supply store in Belgrade.

A 40-by-60 foot, two-story warehouse is added to the main office. Later it would become part of the office complex.

Albert ‘Pete’ Gagne dies of cancer at the age of 61.

The company invests in a new 34,000 sq ft manufacturing plant with a state of the art automated concrete products machine to produce a full line of landscape product along with our traditional masonry products.

The company purchases the former Saco-Brick Company stores in Saco and Kittery.

The company purchses former JK Sales in Topsham, ME.

A brand new seventh location was built in the town of Holden. Now Gagne & Son covers from Holden to Kittery and has a strong hold on the state of Maine.

Improvements were made to the block plant so that Gagne & Son could blend colors better in their patio stones and retaining walls.

Gagne & Son releases its new and improved Cottage Ledgestone II along with the new grande size. 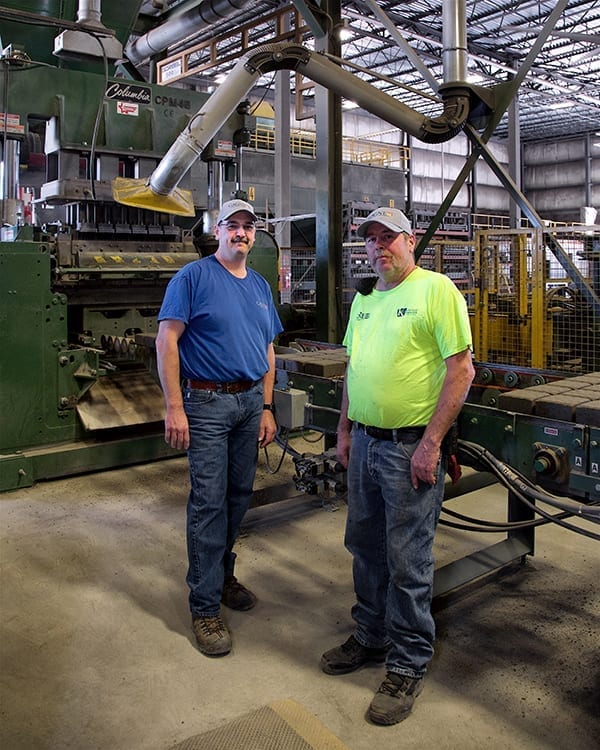